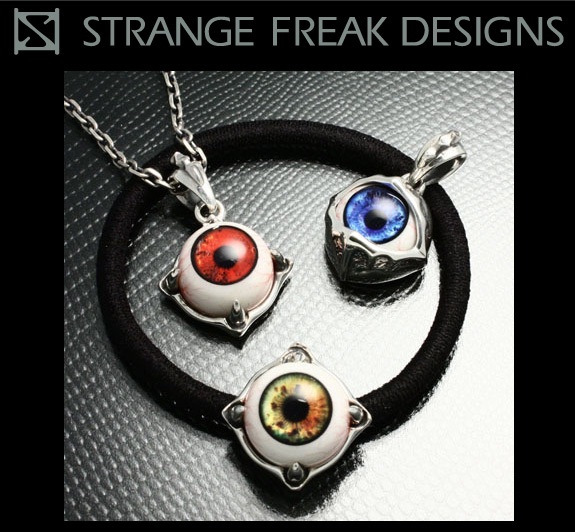 Japanese street fashion is so diverse, that those who are not familiar with it tend to be amazed (or disgusted at times) at how young people in Japan express themselves. The variety of styles and trends in Japan often spreads to other parts of the world, and more people tend to wear clothes inspired by Japanese fashion.

Another interesting feature of Japanese fashion is the way that people get inspired by novels, comic books or even art works. Common trends like Lolita, Gothic, and even Cosplay are inspired by different forms of art and literature. Thus, it is not surprising that an accessory brand would work on art works to create unique accessories.

Strange Freak Designs is a Japanese fashion brand specializing in dark fantasy inspired accessories. According to the company profile, the designs are inspired by the imagination, of creatures and monsters that we only see in movies. The main designer is Naoto Furuya, and most of his designs have a dark fantasy concept, featuring monster and other mythical creatures. A quick look at their website would show you the fascinating and unique accessories that Mr. Furuya makes.


Most of the brand’s accessories are made out of silver, with the human skull as a common motif. Other prominent designs are human eyes, animal/monster skulls, claws and bones. Mr. Furuya has also worked with other designers, creating new designs without veering away from the concept.

Aside from bracelets, earrings, rings and pendants, Strange Freak Designs also have key chains and ponytail holders for both men and women.