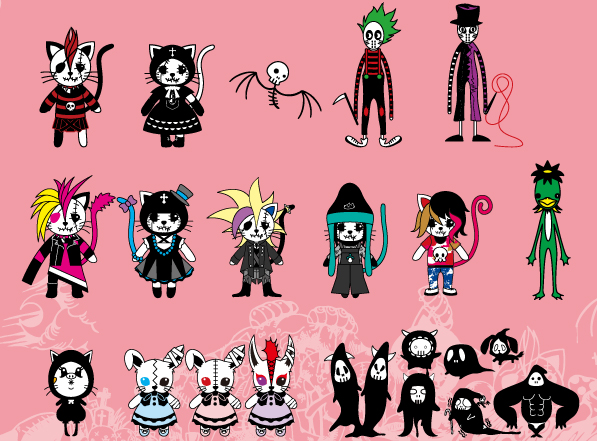 So there’s Superman, Spiderman and Batman, why not have alien cats from an immense H44 Star Nebula?

Hangry & Angry is a rock duo and Japanese fashion label. Rock culture has an apparent influence on its music and also on the clothing line. Starred by two Japanese female artists who graduated from Hello! Project, Yoshizawa Hitomi and Ishikawa Rika, the rock group created a distinct rock pop culture with a touch of goth and punk.

Naoto Hirooka, better known as h.NAOTO, is the Japanese designer behind this world-famed clothing line. His style clearly resembles both gothic Lolita and punk clothing not only in Hangry & Angry collections but also in many other creations like the famed h.NAOTO line. Through years of expertise in fashion trends, he had crafted dresses and costumes for famous artists and bands such as Amy Lee from Evanescence, Ayabie and Psycho Le Cemu.


Although black is overpowering in Hangry & Angry’s clothing collections, Naoto never fail to surprise goth and punk enthusiasts. Among the collections, fans can find a few clothing pieces in striking reds, pinks and even blue tones. He brilliantly incorporated famous prints like tiger and snow leopard skins into punk rock and goth fashion, which is a way to steer away from typical black monotones and add dashes of pink and gothic Lolita ruffles for a more feminine touch. He innovated rebellious Tokyo fashion into a whole new dimension.